All changes in the Set of Rules are related with the ambition to make T-Class more realistic tactical and practical shooting sport. 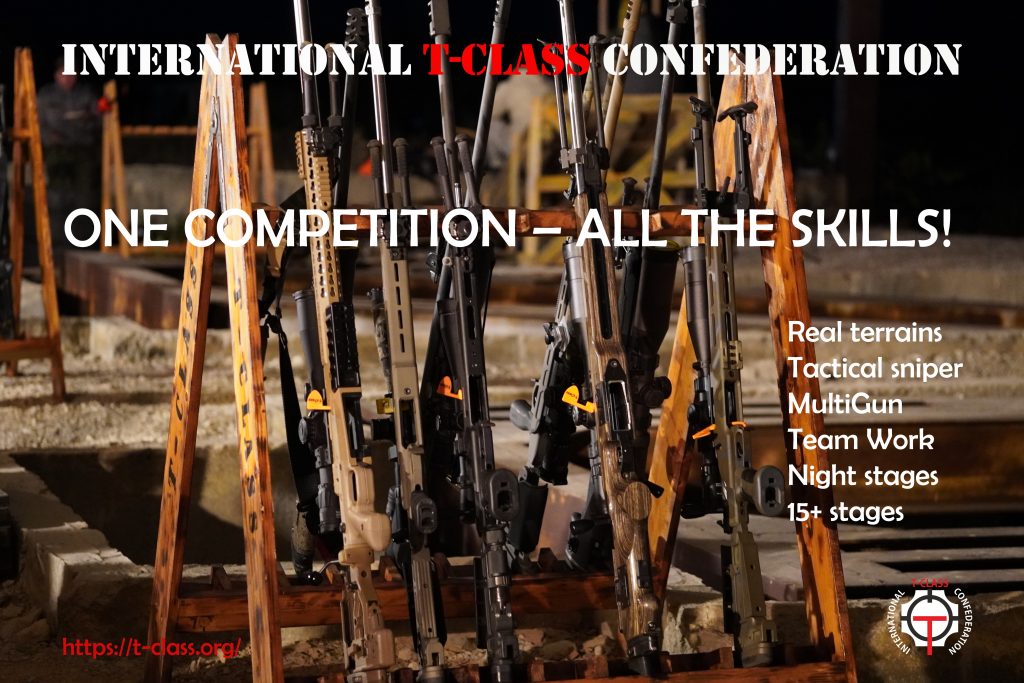 The important changes in the Rules of Sport T-Class, valid for Season 2021 are:
– new minimum distances for paper targets in T-Class MultiGun and T-Class Support and Backup Weapons;
– regulation for night shooting has been introduced;
– new paper target T-Class A1 mini;
– added an appendix with principles that must be observed when organizing competitions in various disciplines;
– changes in the administration of competitions and others.

How did we get here?

Long range shooting with precision rifle systems has been an ever growing and popular sport with many different disciplines like Benchrest competitions, F-class competitions, Varmint rifle competitions, etc.

Most of these shooting sports are static and involve precise shooting with certain high-power rifles on targets, at various known distances.

Over the past 50 years, the sport Dynamic shooting emerged, also called Practical shooting. While it involves shooting with semi-auto pistols, semi-auto rifles and even shotguns, this sport utilizes the idea that speed is equally important as precision of the shooting, hence the use of the so called Hit Factor in Practical shooting is implemented. Also, many of the shooting stages are dynamic, meaning that the shooter has to move rapidly between the various scenes, has to be able to handle the weapons safely under stressful conditions.

“T-Class shooting sport” successfully merges the above. It uses precision rifle systems for shooting at various short and long distances (known and unknown), but it is a dynamic sport. The competitor has to be able to move between the scenes of a shooting stage, to use successfully his theoretical background about making a precise long range shot along with the physical demanding challenges to reach and quickly assume stable or unstable shooting positions, under the limitations of time.

The main idea behind this sport is to recreate realistic shooting scenarios, which resemble the practical sniping used in combat situations by police and military forces around the world.

The issues of safety weapon manipulations are of major importance in T-Class competitions.

There are six major Divisions in T-Class competitions.

# T-Class Multigun division. Sniper rifles, semi-auto assault rifles and semi-auto pistols are used in different or in the same scenes of the shooting stage.

Each T-Class competition is divided into three Modules of shooting stages, which will eventually test and evaluate the basic or advanced marksmanship qualities of the competitor – precision, speed, physical and mental resilience.

T-Class competitions are usually very challenging and hard two-day or three-day events, involving both daytime and nighttime stages, with shooting at a diversity of static or moving targets with most complex shooting scenarios.

Many shooting clubs and organizations around the world promote and develop the ideas of long range shooting combined with dynamic shooting.

In USA, the Precision Rifle Series is the most popular shooting event in this relation.

In Europe, there is the annual Sniper World Cup held in Hungary and many other local or international shooting competitions in Italy, Czech Republic, Slovenia, Austria, etc.

Many of these shooting events are restricted only for military and police forces, while others are open events.

The differences between T-Class shooting sport and the others mentioned above relate onto several features – the MultiGun competitions, Teamwork competitions and the Scoring system.

Each target in every exercise should be measured in milliradians (MRAD), in regard to it’s size and distance. This MRAD system allows the use of virtually all kinds of targets, like golf balls, coke cans, clay targets, metal plates, paper targets and so on. Scoring is made with points, which are attributed to the angular measurements of the target, according to pre-defined tables. For some shooting stages of Module 2 and 3, the so called Hit Factor is applied (the number of hits per target divided by the time, needed by the competitor to complete the course of fire).

The scoring is calculated by adding the results from all module’s stages. There is an automated online Scoring system, which allows the real-time evaluation and publication of the results and scorings. The live results can be accessed online by every competitor or guest at any time during the competition.

The International T-Class Confederation (ITCC) was founded in 2014 for the purpose of promotion of the T-Class shooting sport internationally, with headquarters residing in Bulgaria.

It offers the Set of Rules which regulate the design and management of T-Class Competitions.

Other regions have expressed their interest in T-Class, but have not become members of ITCC yet.

ITCC remains open for any other membership candidates willing to take part in our journey!