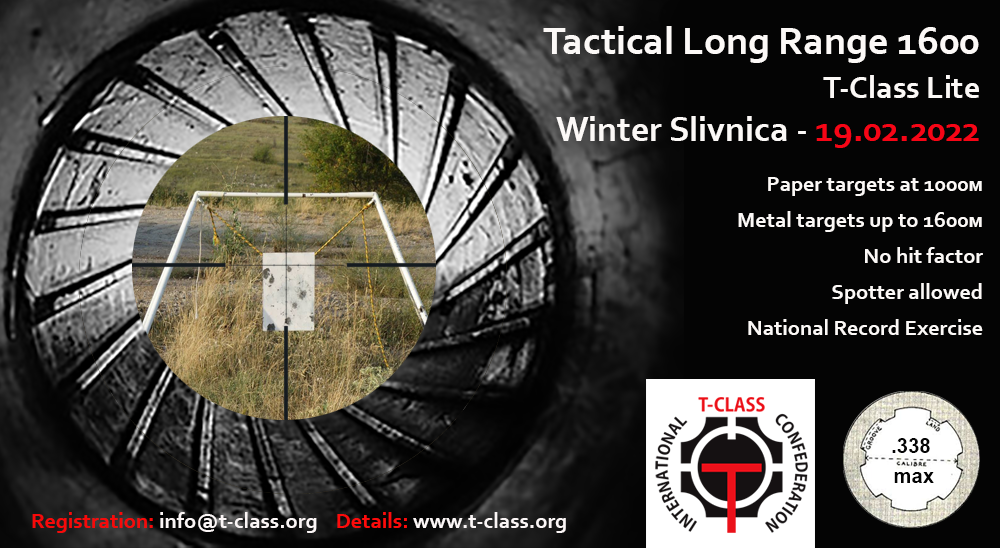 The International T-Class Kahles Cup took place on 19-20th September 2020 at the military shooting range in Slivnitsa, Bulgaria. This was a two-day shooting competition with 20 stages in accordance with the T-Class rules. 30 competitors took part in this event. There were various static and dynamic exercises with shooting distances from 50m to 1200m, from stable and unstable positions – realistic shooting from buildings, towers, trenches, barricades, helicopter platforms at various paper, metal, electronic, reactive and smart target systems during the daylight, also, in full darkness at night.

Scenes, detailed results and the final ranking is available on the online system – http://scoring.t-class.org/

The T-Class shooting sport was founded in 2014 in Europe, and uses the most innovative scoring system to fairly assess all the shooting skills of the competitors. The competition took place under the sponsorship of Kahles G.m.b.H. Each competitor personally received Kahles souvenirs as well as lottery  prizes for the lucky ones.

The International T-Class Kahles Cup was another successive T-Class shooting competition which held up to it’s motto: ONE COMPETITION – ALL THE SKILLS!

This is a first-hand story from one of the many followers of the T-Class idea. My name is Peter Markov and I am a doctor of Medicine.

I have been asked to relay a few words about my experiences and memories from the last 5 years, since I had the opportunity and the pleasure to take part in the concept of T-Class.  In the beginning, I would like to point out that I am not the most experienced competitor and I am not the best shooter. Everything that follows is presented through my personal point of view with nothing to disclose.

I have always believed that in the area of my profession there is a need for a safety valve and a way to “release the steam”. As long as alcohol is not the right choice for me, throughout a certain period of my life I decided to focus on shooting and particularly on long range precision rifle shooting. I believed that it would correspond well with my psychokinetics. Naturally, in the beginning I did not know anybody in this field, the only shooting range which I had access to was in Lozen – with distances up to 100 meters. I was already a hunter at that time and I owned a semi-auto hunting rifle. I decided that my shooting score at 100 meters would increase if I tried to shoot with a bolt-action rifle and a riflescope.

That’s how the saga began. Without many consultations, I purchased a bolt action Steyr SSG 04, .308 cal. I read on the Internet many great reviews about Steyr rifles and that is how I made my choice. Afterwards, I picked a riflescope made by Vortex, which at that time had just released their premium model Razor Gen II. A whole year passed between the order of my scope and it’s arrival to Bulgaria, until I was finally able to produce my first shot with the new Steyr rifle. But, this particular year was useful because I did spend a great amount of time in viewing and reading of books, forums and websites, watching videos, etc. That was the moment when I first stumbled upon TheGunman-bg.com Forum and I first read something about T-Class. I already knew about F-Class and without many considerations I decided that T-Class is something more “Tactical” and realistic, hence more applicable to my vision. Nevertheless, the more I searched for info about T-Class worldwide, the more I realized that it is our own Bulgarian invention. I learned from our Forum that there is a group of shooters who practice at long range distances and have access to the military shooting range of Slivnitsa. I decided to contact them. With the help of a dear friend and a colleague of mine (who is also a practical shooting competitor) I was acquainted to Ivan Barzilov. This was the pivotal moment for me. I already had theoretical background, but I also had zero experience on the range and in a brief period of time everything changed. My first visit to Slivnitsa was with my new Steyr rifle equipped with Vortex Razen Gen II 4.5-27×56 riflescope, Harris bipod and factory ammo Geco Target (a relatively cheap option). I was not able to hit anything beyond 500 meters with this ammo, so I switched to Geco Express. On my next visit to Slivnitsa, quite unexpectedly for me, I ran into my first one-day T-Class competition with two-men teamwork in three Modules, according to the T-Class Set of Rules. This was in April 2016, during my second visit to Slivnitsa and my second shooting at a distance beyond 100 meters in my life. Me and my teammate managed to win this event. For the first time ever I successfully hit the plate at 700 meters during this competition. That’s how I realized that T-Class was the right choice for me.

Afterwards, things went along their natural way. Reading and listening to the advice of my new friends, I realized that in order to reach any success with my caliber at long range, I had to learn how to reload. Even the most expensive factory ammo would not give me the precision and consistency which the well-made reloads could. So, a new chapter of theory was opened – a ton of reading, listening and watching of info about Reloading. It took about a year and a half. With the invaluable help from Barzilov, the right reloading recipe was chosen and at the first competition in which I participated with reloaded ammo by myself, I was able to win the Cup. I successfully hit the plate at 900 meters – 4 times out of 5. This was a competition, organized by 68th Brigade “Special Forces” at the military range of Tsrancha in 2017. To make a long story short: reloading is important. Nowadays, there is more accurate and quality factory ammo, but it is more expensive and it does not provide the opportunity to play with the barrel harmonics (unless a tuner is used).

T-Class shooting sport evolved during the years. There was the Multigun discipline and the new SBW (Support and Backup Weapons) discipline emerged. I had to get my hands on a semi-auto assault rifle and a semi-auto pistol. This type of “runnin and gunnin” kind of shooting were never really my favorite, but I had to keep up with the others. From my current perspective, I realize that the concept behind SBW is right and opens up the possibilities for development of complex shooting skills. It really is a necessity from a practical point of view.
I did take part in some international competitions – in Hungary 2017 and Austria 2019. There, I realized that we are not that bad shooters in comparison to the rest of Europe. I confirmed my observations that it is not necessary for the best and the most expensive rifle and scope to win the shooting event.

My first custom-built rifle appeared in the beginning of 2020, at last. During these four years I competed with my trustworthy Steyr and Vortex. I switched several bipods, many rear shooting bags, tripods, shooting mats, weather stations and a whole bunch of accessories until I found what worked best for me.

When you shoot at long range, it is imperative to be able to measure the exact distance to target. I learned the hard way that most of the contemporary handheld rangefinders are not able to measure reliably the 1000 meters distance to a 20 cm plate. So, I had to purchase an expensive rangefinder (Vectronix Terrapin) and up till now – when we go to a competition – the other shooters are comparing their measurements with me. If you are uncertain about the distance that you measured, you are adding another variable to an equation with too many variables already.

I don’t have much spare time for practice and unfortunately I don’t attend many training events. It is safe to say, that I shoot mostly from competition to competition. But I attend those for fun and as I said in the beginning – to submerge in an area totally different from my surroundings. Not for a moment did I have regrets about anything – even for my unsuccessful attempts with wrong purchases and wasted money (which is a lot).

There are many more things to describe, many flashes, many successes and many failures. I do not want to bring up the load further to this already tiresome text.
Briefly, I would like to propose the following humble advice to those who are willing to read it:
1. T-Class is not about the rifle or the riflescope. The most important part in the equation is the Shooter himself! A cheap factory rifle can bring you a medal, while the super expensive and precise custom rifle may bring you nothing.
2. Both theory and practice matter! Reading and exercising on the sofa will not make you a good shooter, but even if you shoot daily – there is no progress, unless you become familiar with the right Fundamentals, ballistic theory, concepts of reloading, etc. There is more than enough amount of quality information widely available, which is necessary for the T-Class shooter. While other shooting sports like Practical Shooting require development of mechanical shooting skills, habits, speed and muscle memory, T-Class requires theoretical background. There is no one who will assimilate this info and bring it cooked up for you.
3. You can always rely on the help and the advice of others! Our community is composed of kindhearted and positive fellow-shooters. Most of the time on the range is spent in jokes and amusing mood. The hatred and envy, so typical in almost every other sports and aspects of life, are still absent in T-Class.
4. T-Class is not a cheap sport! Resources are required and the rule: “Buy once, cry once” is fully applicable. The better research you make before you buy something, the less likely you will regret it afterwards. There will be unsuccessful purchases…
5. T-Class requires a fair amount of free time! In order to be prosperous, you need time for training and practice, time for reading, time for reloading. I have spent a great deal of money on expensive reloading equipment not to make my results better, but to make my reloading quicker.
6. It is not necessary to seek for the one best shot, the tightest group, etc. It is essential to seek consistency in shooting – to achieve good results in various conditions – to shoot equally well during practice and competition. What if I have a confirmed first shot hit at 1436 meters with .308, does it mean that I will reliably reproduce that shooting? T-Class competitions will test all shooting skills, will pose various physical and psychological obstacles and the ability to remain consistent will be crucial. Pick one bullet/cartridge and go shooting, learn it at various distances and weather conditions. There is no time for endless experiments. T-Class is not benchrest and not F-Class, etc.
7. There is no universal recipe for T-Class, no black and white, just like in life itself. What works for one shooter may not be the most comfortable option for the other. Each one must walk along his path, to refine himself, to learn from his mistakes and the mistakes of others.
8. T-Class requires patience! Nothing will happen at once. You have to be patient to wait for your shipment from USA, patient for the Customs clearance, patient for reloading, patient for the smooth trigger pull, patient to deal with your misses.
9. T-Class is not a step, it is a journey! It is a process of continuous and endless sophistication of knowledge, skills, technical basis, material assets, etc. But it will also bring you new friends, nice moments, positive emotions.
10. For me personally – T-Class is a thrill!

Due to the ongoing worldwide COVID-19 crisis, ITCC regretfully informs you that all planned events of the 2020 Calendar are STOPPED for the time being.

ITCC will provide immediate updates on this issue after the situation changes.